An old rhyme that describes the Cuckoo’s time in Britain 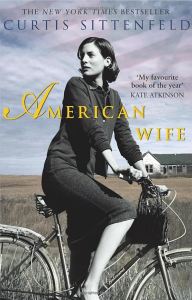 I read this novel with utmost surprise on two counts. I had expected a sharp political satire and instead found an almost forensic examination of a woman’s psyche and a patient and earnest character study. Secondly as a solicitor I wondered how on earth in this litigious age the author managed to get what is a barely disguised portrait of Laura Bush past her publisher’s legal department. Embellished with lost love, abortion, blackmail and a lesbian grandmother, the novel is daring, unashamedly commercial and potentially a legal minefield.

The first lady is cast as Alice Lindgren Blackwell who is a gentle, only child, born in the 1940s to impassive parents in a small Wisconsin town. The story describes Alice’s unlikely journey from small town ingénue to marrying rich alcoholic wastrel Charlie Blackwell who astounds everyone by becoming President of the United States.

The crux of the narrative comes before Alice’s country club marriage. She is haunted by the memory of Andrew Imhof a handsome boy she loved at the age of 17 but accidentally killed in a head on collision. An unhealthy relationship with the dead boy’s brother leads to pregnancy and an illegal abortion. Dr Wycombe, an eminent female surgeon with whom Alice’s Granny is having an affair performed the abortion-skeletons the wife of a Republican President cannot afford to have in her closet. Some 40 years later this feminist surgeon attempts to blackmail Alice.

More than a decade after Andrew’s death Alice dutiful, serious and thoughtful, now a school librarian and registered Democrat startlingly falls for and marries boisterous, charismatic Charlie Blackwell, the wealthy son of a bastion family of the Republican Party.

As Alice navigates her way through the strange rituals of the Blackwell’s country club and summer estate she remains uneasy with her newfound good fortune and when Charlie eventually becomes President  she is thrust into a position she did not seek-one of power  and advantage, duty and leadership.

Alice must now face contradictions. How can she both love and fundamentally disagree with her husband? What should she do when her private beliefs run against her public persona? How can she be a free thinker and yet an obedient wife and first lady? Indeed how did Charlie a middle aged frat-boy end up as president ?  But Alice supports her husband throughout his calamitous policies, with her face lift and Ferragamo shoes she becomes the embodiment of benign tolerance, burying her moral scruples with justifications of her conflicted state. As she says “I lead a life in opposition to itself.”

The novel is wonderfully written and succeeds in allowing the reader to continue to have affection for Alice even when her martyrish tendencies become frustrating and despite Alice being able to deceive herself about Charlie and being painfully aware that she often does so to maintain the status quo.

Above all Sittenfeld’s characters bring home the importance of accepting personal responsibility. While Charlie absolves himself as “an instrument of God’s will”, Alice reminds us that it is not so simple. “All I did was marry him….You are the ones who gave him power.”

In a recent survey carried out by the Royal Institution of Chartered Surveyors (Rics) it was predicted that property prices will continue to rise over the next few months.

Supply is still falling behind demand with a decline in the number of houses coming on to the market. Rics Scotland director Sarah Speir said “With supply restrictions continuing to impact the market in Scotland , it is imperative that the Scottish Government and industry look at viable solutions to the lack of housing and increase new-start targets in order to meet needs.”

Meanwhile a report by Bank of Scotland has suggested that Scotland’s largest cities need thousands of new family homes, partly because the number of “downsizers” is dwindling.

The Bank found that only 8% of over 50s had any plans to move to a smaller home which in turn means it is harder for “second-steppers” to move up the property ladder.

Alasdair Gardner the managing director of Bank of Scotland commercial banking said “This study identifies the major pressures facing Scotland’s housing market with demand for new rental and privately owned homes going to increase in the coming years.” He added “All parts of the housing industry-government, local authorities, investors and house builders must work together to ensure we build the homes Scotland needs.”

I specialise in property law and if I can help you with any property transaction please get in touch and I will be delighted to help you. My contact details are 0141 552 3422 or ajg@mitchells-roberton.co.uk

At Mitchells Roberton we have a dress down day once a month for a good cause. This month a colleague suggested an additional special dress down day for the Disaster in Nepal.

I was particularly drawn to this cause because I was lucky enough to visit Nepal during my trip around the world in 2010. It remains one of my favourite places . I visited both Kathmandu and Pokhara, where much of the destruction occurred. Kathmandu and its surrounding areas were full of beautiful temples, abundant with colour. Pokhara was enclosed by stunning  lakes and mountains. However, the primary reason that I loved the country so much was its friendly and warm people.

One example is when we were on a trek across the mountains and stayed in a small bed and breakfast. We were the only guests and in the evening the owners gave an impromptu demonstration of their traditional song and dance, even managing to persuade our trekking guide to join in the fun. We were then encouraged to show our own traditional dancing which involved us trying to give a very poor rendition of the Gay Gordons – much to the amusement of our hosts! As we carried on our trek each person we met gave a traditional greeting of ‘Namaste’, with the palms of their hands held together, their head bowed, smiling.

I was very pleased that our firm raised a total of £250 which will go to the DEC Nepal Appeal. A couple of my friends were in Pokhara at the time of the earthquake.  Thankfully they were in a hotel designed to withstand a large earthquake. Again my view of the people of Nepal was reinforced. The owners of the hotel’s first priority was their guests’ safety and then they took in others who had lost their home in the disaster. Hopefully the funds raised here and elsewhere will help the people of Nepal get back on their feet.

For more information and to donate to the Nepal Earthquake Appeal, please visit http://www.redcross.org.uk/nepalhero